A very common requirement for modern embedded devices is the need to update the embedded software via an arbitrary communication channel (e. g. a serial interface, ethernet connection, some field bus like CAN or a wireless link).

The redBlocks component library addresses this requirement by providing an out-of-the-box solution, consisting of the necessary target code as well as a host software update tool running on Windows and Linux operating systems.

A typical memory layout for a system that is running from flash and needs to support In-Target-Software-Update looks like this: 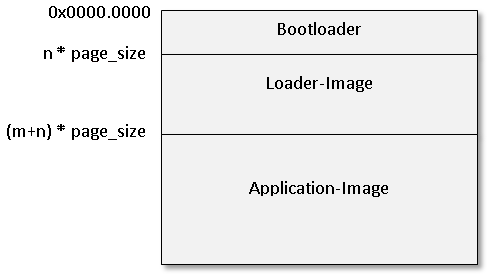 If, on the other hand, the target is extremely short on flash memory, the functionality of the Bootloader and the Loader-Image can be combined to a single image, in order to avoid the common overhead of the two separate images.

The redBlocks In-Target Software-Update-Framework provides a number of classes that support this general approach and several variations of it:

Just like all the other redBlocks components, the classes of the In-Target Software-Update Framework are highly modular and configurable. Thus, even in a totally different scenario (e. g. software update by accessing an update host per FTP) major aspects of the required functionality can still be covered with the redBlocks In-Target Software-Update Framework.

Overview of all redBlocks Components